Year 12 at the Department for International Trade 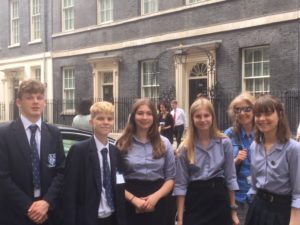 Year 12 Economics students have participated in a competition organised by the Department of International Trade. Having won the Midlands heat last week our pupils did a fantastic job representing the school at the Foreign and Commonwealth’s offices in Whitehall. We came second out of six finalists, although we ran the winning school very close, as acknowledged by Dr Liam Fox, the Minister responsible for International trade. Well done to Katie Shuttleworth, Anya Piechowiak, Emily Sandalls, James Petts and Alex Roberts. 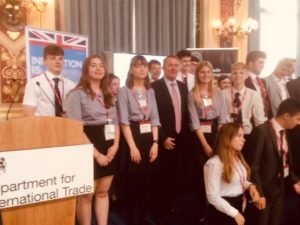 In the regional heat the pupils had a number of presentations from companies that actively export products and services and had two challenges. The first was a simulation game where they had to produce and export cars and lorries, competing for resources against other teams and selling with changing external conditions (such as tariffs). The second challenge was to choose a product and a country to create an export plan.

In the final the pupils had to create a presentation on how to inspire other pupils to consider a career involving exporting. They were judged based on their innovation, their presentation and the content. They had to present to a room of 80 people (including the Minister of State!).

The day of the finals proved to be a stimulating and entertaining day in Whitehall, with speakers including the UK’s chief trade negotiator, Crawford Falconer, the Secretary of State, Liam Fox and the Department’s Chief Economist, Richard Price. The students each had one to one meetings to discuss career opportunities in trade and have been given the opportunity to apply for apprenticeships with the Department when they turn 18.

As well as being located in the grandeur of the Locarno suite the students also had a tour of the location, including photos outside of 10 Downing Street.

Congratulations to the six students and to Mr Dick and Mrs Parnham who organised this fantastic opportunity for our students.